Four Tasks at Once 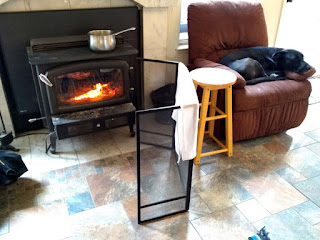 The nice woodstove does a few things well.

First of all, it heats the whole house. Secondly, it dries the kitchen dish towels in a matter of minutes. Third, it keeps a dog warm -- or a person, if the person is quick enough to get to the chair before the dog does. And fourth, it saves electricity by cooking my onions and celery for my Chicken Stuff dressing. (If you could peek into that pot, you'd see the celery and onion simmering away.)

Let's add a fifth: it's beautiful and comforting to look at.

The Tale of Woe 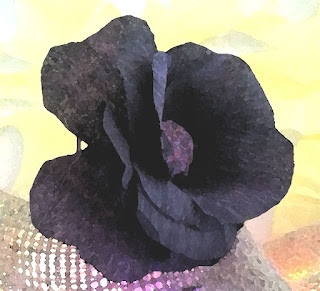 August: Joma brings home the flu to Bernie and me, possibly from some germy little hog on the soccer team. My dog Kermit starts rubbing his eyes and muzzle -- lots of wildfire smoke in the air, so probably a reaction to that.

September: Recovering, lots of coughing for us, more rubbing by Kermit, still so much smoke.

October: Alex's health is getting bad enough she has to quit working.  Kermit is losing weight and his coat feels dry and dirty.

November: Kermit takes an extreme turn for the worse, stops eating, loses 20 pounds and looks like a fur-covered skeleton. Alex has surgery to correct her health problems. By November 10th, I quit NaNoWriMo because I fear my dog is dying.

December: Kermit appears to be on the mend after we nearly had him put down -- he couldn't walk without crying with pain, wouldn't eat. Bernie has surgery scheduled to correct a scar tissue problem from an operation 44 years ago, but halfway through the surgery, the doctors see something in his monitors that makes them fear a heart attack, and he is admitted to the hospital (it was supposed to be a 3-hour in-and-out thing) for three days for test upon test on his heart.

Christmas: Bernie has a clean bill of health for his heart, his surgery was quite successful, and I know from the medical tests that he doesn't have the same heart condition that killed his two brothers in the last three years. Kermit looks good again, putting on weight, his coat soft and glossy. 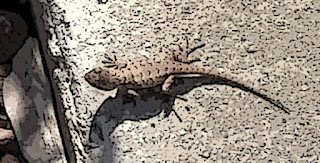 I'm not really sure why, really, I'm doing NaNoWriMo this year. I don't have the time to do it, practically speaking, but here I am, on Day 5, with a respectable word count of 9214. I was hoping for 10k, but was easily distracted today by laundry, and an absurd desire to maintain some kind of timeline consistency.

I doubt that any of what I'm writing will be usable in a new novel; maybe some, maybe not any of it. What I do know is that since I started writing again, nightmares have stopped completely. A month of no bad dreams is worth the time eaten up by writing. It's like having a vacation.

The lizard above is one of the MANY we have on the property now. I'm thrilled that the sagebrush lizard population has boomed. They eat ants, says the Internet. Indeed, I am not seeing the swarms of megacolonies of ants that I did a few years ago.

With the time passing into November coolness, the lizards have to sleep most of the time. I get to see them if I head outside around noon, but before that, and after two-thirty or so, it's just too cold for them. Kind of like me, and writing out in the studio.

Liz is saying, "Hey, why does it get so cold when you write?"

You know, I can't remember when I started these pictures. It was so long ago that I found them under a pile of papers, having forgotten about them. As I set them out on a work table, I thought "Geeze, why was I so timid about this?"

The limited palette I'd chosen (good thing I wrote it down in a project notebook I found with the preliminary paintings) was Titanium White, Cadmium Orange Medium, Naples Yellow, Alizarin Crimson, and Burnt Sienna.

The inspiration for them was a piece of seashell that I carried with me for a while, calling it a "worry-stone" -- I could find it in a pocket or on my desk and fiddle with it. Turning the shell-shard, I found the lines making strange scenes.

In the third one (on the right) imagine the lines to be stars. I'm pleased with the resulting images, and we're already trying to figure out where to hang them once they are dry. 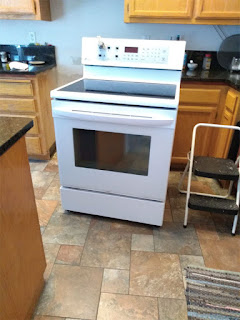 It had a pretty blue enamel interior.
It had a convection oven function.
Mmm, it had a smooth ceramic top.
Self-cleaning.
Warming center on the top.
It was on sale.

Yes, I bought it, and thought it would be the last range I'd ever have to buy, so lovely to look at and play with that it was a trophy stove for my kitchen, even though I do tend to sneer when people make trophy alliances or buy trophy homes or cars.

Serves me right, I guess. The first time I used the self-cleaning function, it did a really crappy job. I mean REALLY. So much so that I went to the store to buy oven cleaner, only to find that you may not use oven cleaner on convection ovens. I was not pleased to discover I'd have to live with a dirty-looking oven. But surely, the industry of oven cleaners would evolve to come up with a solution, sooner or later.

Last spring, we began hearing groaning noises coming from the stove when we used the oven. Intrepidly, Bernie researched and found it it was because the convection fan in the oven was giving out. Repair would be fairly inexpensive, and relatively easy ... so we'd deal with that when we had to.

Labor Day Weekend; a family meal, a big batch of delicious breaded pork chops with mashed potatoes and gravy, and vine-ripened tomatoes and corn on the cob ... WTF, the front burner stopped working and now my chops were sitting in oil instead of frying in oil! Switch to another burner, salvage the rest of the meal, dangit. Well, those burners can be replaced, a bit of a tricky job, true, but not impossible.

The next morning, I turned on the back burner to heat water for my tea. It came on, but so did the big front burner, without me touching its controls. What if I had been using that front burner area like an extra bit of countertop? After all, that's the main reason I like flat ceramic tops, because they can function as additional serving space or work area.

After researching, Bernie found that the likely source of the problem was the control panel. Seriously? For a barely three year old stove?

About $250 for the part alone, not counting the cost of service call and labor if it turned out to be a repair he couldn't do himself.


My turn to do some Googling of stoves. I found a plain old damn electric range at Lowe's for $350, although it wasn't in stock and would take some weeks to get here. 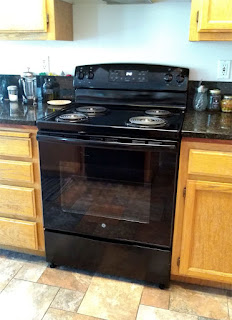 Next best option: get the model that simply upgrades to a self-cleaning oven. $450. In stock. And when we went to look at it, and subsequently buy it, we got $100 off by opening a Lowe's account, which costs us nothing. And there it is, tucked into it's spot, looking like it belongs to the kitchen and the dark granite countertops.

It's pretty.
The burners heat up really, really fast.
The controls are simple.
The oven is WAY more even for baking (Bernie made some outstanding zucchini bread)
The oven pre-heats a lot faster.
The burners' temperatures don't fluctuate.

The LG ceramic top stove was probably never meant to be used by people who cook as much as we do. I needed a workhorse, not My Pretty Pony.

I think I've got it.

Gulf Fritillary in Our Garden 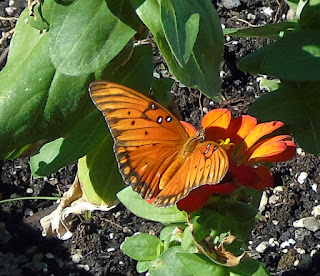 Bernie called me out to the front garden to look at a butterfly he'd never seen before. I hadn't, either, so off to Google Search we went. This is a Gulf Fritillary, usually not seen this far north. But apparently they have been in the Bay Area in ages past, and recently have founded a colony in Sacramento County. Simply beautiful.
Posted by Aser at 5:45 PM No comments:

Bean Therapy in the 2019 Summer Garden

This has been a year of exploration of peppers, which I never bothered to grow since back in the day when my mother and I would plant tomatoes and peppers to make our own salsa casera. After I moved to California in 1988, I had no need to plant peppers and make the cooking sauce; out here EVERY supermarket has it, unlike rural Pennsylvania.

Last summer I began using peppers in my minestrone recipe, and found that they had become indispensable in my cooking. Box 7 became my pepper nursery, with Anaheim chilis and Italian White Wax peppers. And what the heck, why not plant a pepperoncini and a bell pepper as well?

Having no room set aside for the last two, I just jammed them in with my first planting of wax beans, which I'd started too early and looked like lame weeds. To my surprise, two weeks later, the wax beans had begun to leaf out like crazy, and the bell pepper and the pepperoncini were enormous and covered with blooms, while the Anaheims and Italian White Waxes were less than half the size.

Now back to tomatoes -- which I love like a crazy old cat lady loves kittens. This has been a crummy tomato year in the Pilarski Farmland. Seemed like every time the plants had a wave of flowers, the temperature went over a hundred, which shriveled the buds. And the first nine Shady Lady plants I put in ... they were not thriving. Since peppers and tomatoes are both from the same family, I began planting bean seeds in with the sad tomatoes.

And seeing how pathetic this year's tomatoes were, Bernie told me to go buy more plants, three more Shady Ladies, which I planted into the new bed with beans, not waiting around to see if they needed beanie buddies. This is Box 10, tomatoes planted with beans:

You can't even see the beans in there, except on the edges. But boy oh boy, those tomatoes know the nitrogen-fixing beans are partying right along with them.

And then, this poor trio, which were the first plants this spring:

Next year, with bean buddies from the beginning, we'll be planting Anaheims again, as they are delicious in a number of dishes, and of course, jalapenos and a bell or two, but the Italian White Wax -- turned out to be so hot that when Bernie nibbled one, I thought he was going to pick up a frying pan and smite himself with it to put himself out of his misery.

They are now compost.

Aser
Someone told me that they were bored after retirement, and so went back to work. I'm still seeking a little boredom for a change of pace, and not finding it. As Managing Editor of the ezine the Piker Press, I read a lot of great stories, meet a lot of wonderful people, and tear a lot of hair out over computer glitches. But I still try to work in horseback riding, writing books (and movie reviews), fiddling with the garden, art work, sewing, cooking, coaching NFL football from my favorite chair -- and soaking up every minute I can with my beloved husband, Bernie.